Previous post
How A "Moai" Could Combat Loneliness & Help People Live Longer
Next post
Worried About That New Medical Study? Read This First.

February 23, 2020/ by Amitha/ in Purpose/ Comments Off on Interview Series: Roger Holzberg

Roger Holzberg is the co-founder, along with Leonard Sender, MD, of Reimagine Well, a company that designs and builds immersive healing programs for hospitals and treatment centers. The Infusionarium™ platform empowers patients to receive treatment in the place they believe will best heal them, then empowers them with enhanced educational “Learn Guides” and a safe support community for their patient journey. He served as the first (consulting) Creative Director for the National Cancer Institute (NCI). The “evolution” of Cancer.gov, the NCI Facebook, Twitter, Mobile and YouTube channels are all projects that his creative team took from concept through launch. Previously, Roger spent 12 years as an award-winning Creative Director / Vice President at Walt Disney Imagineering where he had the opportunity to lead the creative development for a broad portfolio of projects ranging from PlayStation® games to theme park icons and multiple Disney World Celebrations; from mass audience interactive experiences and rides to the MMOG Virtual Magic Kingdom. In “classic media,” he has written and directed feature films and television, but is genuinely proud of researching and writing the IMAX film “The Living Sea” (Academy Award nomination for documentary). Roger is a father; a 15-year cancer survivor; and a competitive triathlete (3 events yearly), using the sport to raise research dollars for causes he supports.

1.What prompted you to start Reimagine Well? 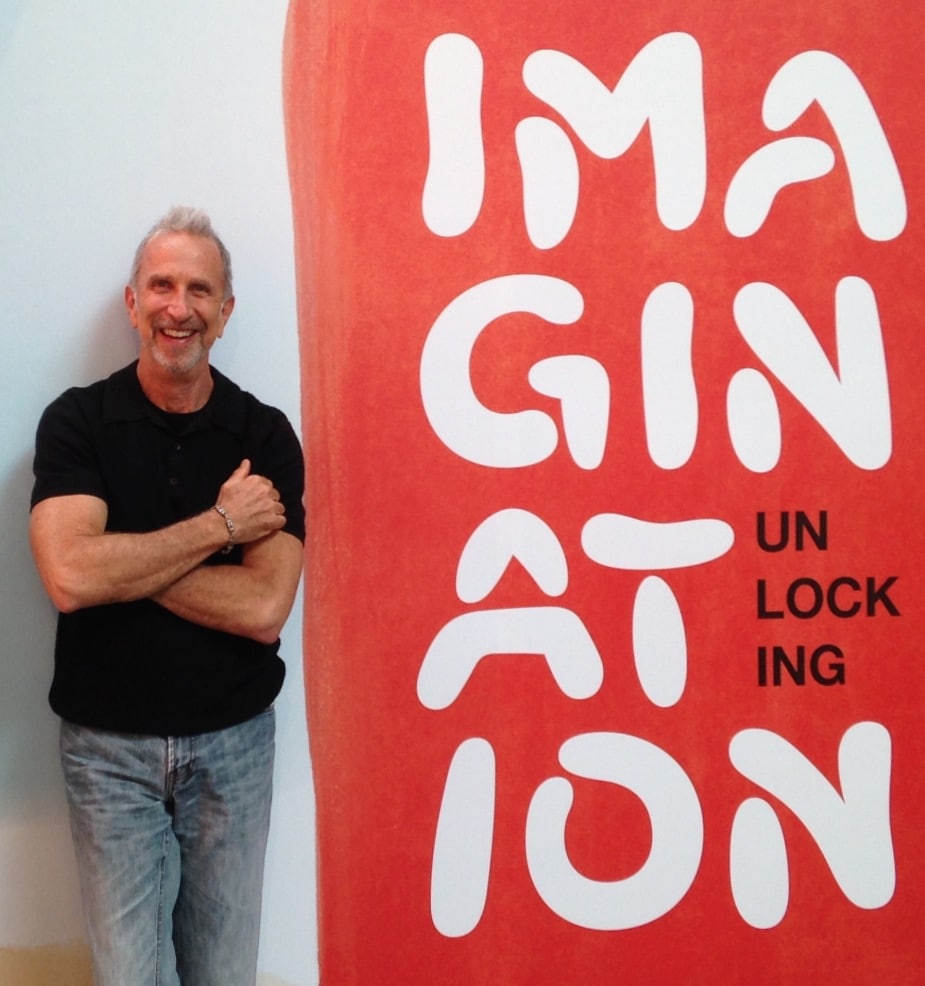 As a cancer survivor I had a firsthand look at how “unhealing” the patient experience was in the US. At the time I was diagnosed I was a Vice President and Creative Director at Walt Disney Imagineering. I put together a group of volunteers from Disney that were either cancer survivors or caregivers and we worked on projects that ranged from a support platform to contributing to the redesign of the lobby at Children’s Hospital Los Angeles, and then doing the “living with” stories for the launch of Livestrong.com and adapting a Disney attraction called “Turtle Talk with Crush” for use with pediatric patients at Children’s Hospital of Orange County. I was then recruited to be the first (consulting) creative director at the National Cancer Institute, redesigning Cancer.gov and taking the institute into social media and story telling. All of these experiences planted seeds in their own way for re-envisioning the healing environment.

2. You had an interesting journey as a Disney Imagineer, what was that like? And How does that inform how you approach healthcare?

Back in 1964 in Flushing Meadows New York, when I was eight years old, I attended the Worlds Fair and saw “Great Moments With Mr. Lincoln”, the first audio animatronic figure and nearly tore my dad’s jacket sleeve off when I asked ‘how did that happen?’ His response stuck with me: “A man named Walt Disney invented that.” That was the beginning, and since then I have been drawn to what’s known as “experience design” (as opposed to film and consumer product design). Experience design is so much more powerful when a medium is multi-dimensional. I ended up taking college courses in design and finishing up at the California Institute of Arts. In my early career in the entertainment industry I worked in special effects and production design, and wrote large format IMAX films. The educational expansion of the Imax films led to an opportunity to help build “Knowledge Adventure” and the “Jumpstart” brand. I was then recruited to Disney Interactive to be their first creative director. The Imagineering division of Disney recruited me to work on the Millennium Celebration and lead the creative teams on the 100 Years Of Magic project at all four Disneyworld theme parks. After 9/11 we saw a big retraction in vacation travel and I had the opportunity to build a team and lead a project called Virtual Magic Kingdom. This had 5 million children interacting with children in brick and mortar parks and sometimes during the experiences that followed. So the seed was planted around blending the things that hadn’t been done before. I spent a total of 15 years with Disney. Walt Disney coined the phrase the “architecture of reassurance.” Disney parks were designed to be a safe place for families to play. At Reimagine Well we try to create an ‘architecture of healing’, creating a safe and special place for patients and families to heal. So my 15 years at Disney informed what I did to create an emotionally engaging space for people to play. I realized the same tools could be used for patients and families to experience the patient journey.

3.You had a health scare of your own not that long ago. Can you share more about that?

Cancer has been a ribbon throughout my life, from losing one of my best friends as a child to pediatric cancer and losing my mom to cancer in my 20s. For me, as a competitive athlete I got to know my body really well, and in 2004 I began noticing that something subtle was off. I’d gained weight without changing my diet or exercise regimen, I hit an energy wall in the afternoons. On the anniversary of my mother’s death I remembered her saying ‘don’t pretend nothings wrong as that’s what I did.’ I spoke to my doctor, had an MRI of my neck, and it was clear that I had thyroid cancer. One in three American women and one in two men hear the words “you have cancer” during their lifetime, but in that moment the world becomes a rush of white noise. You see a physician across from you speaking a language you don’t understand. I call it the “terror moment.” When you’re in shock you don’t make the most rational decisions since you are operating out of fear. You’re staring your own mortality.

It wasn’t until I was undergoing radiation treatment when the healing environment aspect hit me. The walls in the hospital hadn’t been painted since 1980s and this was the most un-healing experience I could imagine. I came from a place where the architecture of reassurance is what we practiced. It didn’t even smell right! It hit me like a ton of bricks that the patient experience, even though I didn’t know that term yet, was something to be worked on.

4. What were the things that helped you get through the cancer diagnosis?

I told very few people about the diagnosis, and actually didn’t tell my kids until after the surgery, when the pathology results came back. I remember going online and seeing 70 million hits for my search — I was in overload!

But I spoke with a good friend of mine who was a cancer survivor who advised me to just focus on one thing at a time. Effectively, the patient journey has different phases, from diagnosis to treatment, then healing and well-being. So the biggest thing that helped was when I realized I only needed to focus on just one of those phases at a time, suddenly I could catch my breath again and look at phase relevant to me at that point was enormously helpful. This then informed our social platform for Reimagine Well, which helps patients set achievable health goals and use the wisdom of the healthcare community (which includes healthcare professionals) to navigate the patient journey..

5. What’s the most misunderstood aspect of cancer and dealing with a diagnosis/living with cancer?

There are a few things.

The first is that unless it’s critical, take the time to let yourself get the information you need. More often than not you have time before you need to jump into treatment. Take the time to find the right care team, do the research and get informed and get a second opinion.

The second myth is that all cancer treatments are the same: that’s not the case. A small community center may not include the clinical trials that may be available at a larger center. You owe it to yourself to do the research if your odds for survival are potentially better at a larger center.

The third is that clinical trials turn patients into guinea pigs. This is a big misunderstanding. Clinical trials often provide the best, most attentive, cutting edge clinical care someone can get, and if a clinician recommends a trial you qualify for, don’t be afraid to consider it.

The last is the role of diet and exercise. A healthy BMI can significantly reduce the chance of cancer recurrence and there are recommendations for 45-75minutes of exercise daily. Unfortunately very few doctors are trained in these lifestyle factors. Find a credentialed Registered Dietician to help you design the best program for you and your specific health goals and medical needs.

6. What does thriving mean to you?

Thriving in my new normal means having an emotional, spiritual, and physical health balance. Compared to 15 years ago, I can honestly say my work, family, and active lifestyle are so much better today than it was before my cancer diagnosis. I think it was because of my approach to the disease, my new career with Reimagine Well (which happens to be very rewarding) and adopting a healthy and active lifestyle. Thriving also involves having a supportive community, we hold each other accountable for our health goals as well as providing emotional support and friendship.

7.What are you most looking forward to with Reimagine Well and in general?

Right now I’m teaching a Healthcare by Design course at the California Institute of Arts. Last year we delivered a pilot project to Children’s Hospital Los Angeles and this year we will create a pilot program for the Henry Mayo Newhall Hospital in Valencia, so helping to educate and train the medical experience designers of tomorrow is super rewarding. At Reimagine Well we are launching a new experience design program, which involves reducing the need for excessive sedation in several pediatric medical centers, and using virtual reality as part of this program. With the proof of concept pilot program we were able to reduce the mean age of sedation from 10 to 3; a formal clinical study (with research ethics approval) is now underway with Nebraska Medicine on this. In 2020 we will also be expanding into pediatric behavioral programs, and adult oncology.