December 11, 2019/ by Amitha/ in Purpose/ Comments Off on Interview Series: Darren Sudman 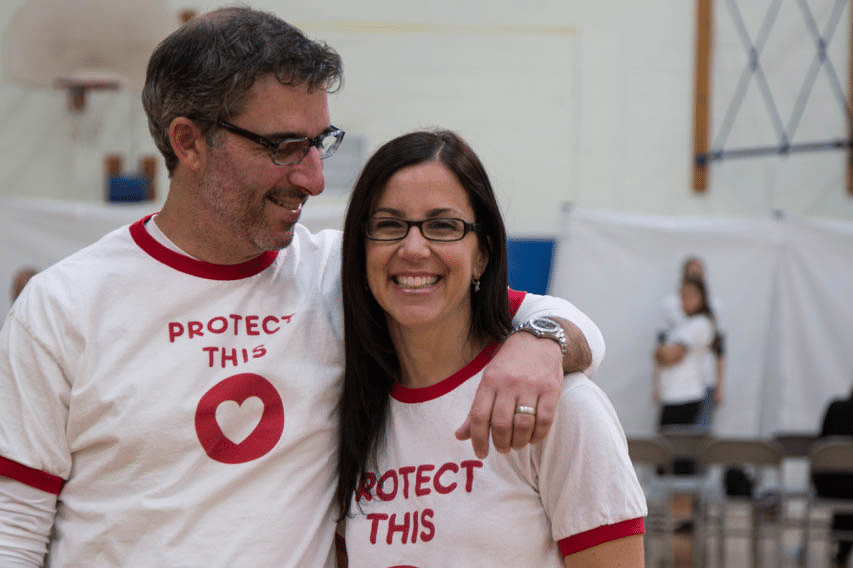 Darren Sudman is the CEO of Simon’s Heart which aims to prevent sudden cardiac arrest in children. The organization raises awareness around sudden cardiac death in children, provides free heart screenings, distributes AED devices, promotes research, and advocates for lifesaving legislation. Sudman spoke with me in August from Philadelphia.

We met back at TEDMED a few years ago and I was very struck by your passion about Simon’s Heart. But you had an interesting journey before founding your organization. Share a bit of that with readers.

I wanted to be a lawyer to make a difference in the world. The area of law I was practicing in wasn’t that fulfilling so I left the practice after five years. I did some lobbying on Capitol Hill for a non-profit in Washington D.C. Then I worked for America Online when the internet was becoming a thing, and my wife and I moved to Philadelphia where I worked in real estate and for a credit card company. I got my high school teaching certificate in history – I taught one semester at a local high school then taught another semester at a private school but went back into business since it was hard to find full time work. My work history never made sense until I started Simon’s Heart. Now, everything has come together.

1.Tell me about what Simon’s Heart does.

We raise awareness about sudden cardiac death and cardiac arrest in children, and believe that ECG screening should be the standard of care for all children, especially those who have lost a family member under the age of fifty, suddenly and unexpectedly.

We want people to know cardiac arrest isn’t just an adult thing. It’s the number one cause of death in student athletes and takes the lives of thousands of kids each year. Most of these conditions are detectable and treatable. In terms of raising awareness, we do this in a few ways. We worked with lawmakers and organizations in 14 states to pass Sudden Cardiac Arrest Prevention Act. That requires parents, coaches, students to be familiar with risks and warnings. Another way is through campaigns with colleges and professional sports teams, for instance with Philadelphia Flyers. All professional athletes get their hearts checked but through the program with the Flyers we have the “Overtime Challenge,” where, everytime the team goes into sudden death overtime, we donate an AED device to a youth facility. Most of these centers have never had an AED device available. Still another way is through HeartBytes, a digital registry of seemingly healthy kids that we built four years ago with Pulse Infoframe. We wanted to gather data we collect at heart screenings – EKG, heart images, and de-identify them to make it available researchers. That data has produced five abstracts, and will be presented at the American Heart Association conference as an abstract this Fall.

2.Let’s talk about what happened in 2004, which led to creating Simon’s Heart.

Simon was my second child, born on October 21 2004. He was a happy and healthy 3 month old to our knowledge, but one day he didn’t wake up, and we found he had died in his sleep. It was determined to be sudden infant death syndrome (SIDS). Our pediatrician advised we get our hearts checked. My wife Phyllis was diagnosed with a heart rhythm disturbance called Long QT Syndrome. There is a link between Long QT and SIDS. As well, Long QT is one of a handful of conditions that leads to sudden death in young athletes. We wanted to find ways to prevent another family from losing a child so our first initiative was to provide free heart screenings for students through school, working with a local pediatric cardiologist. This led to founding Simon’s Fund, which is now Simon’s Heart, to expand the impact. We now have a network of 40 cardiologists. On a personal level, after Simon’s death, my other kids, Sally (who was two when Simon died) and our son Jaden, were also screened.

3.What you experienced is something no parent ever expects to face. What can you share about grief, and what getting to your ‘new normal’ was like after something so unimaginably devastating.

Having met lots of grieving parents over the years, there’s no formula. I can’t speak for Phyllis, but what worked for me was that my daughter was two and she needed me to get out of bed everyday. She was really young and didn’t have a grasp of what was going on, and I had to take care of her. That forced me to wake up and live everyday as best I could – she was my motivation. We didn’t know it at the time, but Simons Heart was a tremendous help for us to move forward in life. It not only keeps Simon present in our life, but it changes the narrative: We just suffered one of the worst tragedies but through it we could create new narratives that involve helping prevent this from happening to other children, meeting families with similar experiences. When Jaden, our third child, came home, he brought another ray of sunshine to our house and reinforced the fact that life goes on and there’s still goodness in life.

4.What is the biggest misconception about grief?

I wish more people embraced it. I got some really unique advice from a co-worker who really had no education or expertise in the field of grief. His advice to me was “when you feel grief let it pull you under and don’t resist it – it’s temporary and when you’re ready, you’ll come back up.” This idea continues to work for me. Instead of resisting those emotions it’s sometimes best to let them run their course and step up and move forward again. So many people start to panic or resist the feelings of grief, when in reality it’s one of the most normal emotions we have as human beings. I believe those experiences also help us empathize better with one another as well.

5.That’s sage advice. Switching gears now, why is cardiac screening important? I come from a world where, from both medical and epidemiology point of view, there can be harms with overscreening – false positives for instance. How have your initiatives been received by the medical and public health communities?

I’ve looked into population health screenings. The concerns about cardiac screenings for kids are identical to concerns around mammographies and colonscopies. They key is to admit what we don’t know and to stay curious. So if someone criticizes EKGs because of their high false positive rate, that shouldn’t end the discussion. There’s always a high false positive rate when don’t know what looking for – at this time we don’t know normal variations in healthy childrens’ hearts. So this is why collecting data is important. I don’t see these objections as roadblocks, but I see it as disingenuous to criticize screening as expensive or with false positives without looking at how we can solve the problem. I read a. paper recently where a doctor in the 1950s advised against mammography, saying “If I cant feel it not there,” – that was the mindset then, and it has obviously changed. If that doctor embraced our ignorance and remained curious, he might have been part of solution. At the same time, I’m not saying that EKG screenings are the endgame here, but there is good research out there that shows that an EKG, when coupled with a physical and medical history, is the most effective method of detecting heart conditions.

6.This leads into my next question – there is a lot of interest in wearables now, particularly for things like sleep and cardiac tracking. Do you see future collaborations with tech?

It’s not crazy to say that one day every kid will have a wearable and it will be able to conduct a twelve lead EKG instead of a two-lead device. By then we will hopefully know enough about seemingly healthy kids’ hearts, and if anything looks abnormal kids will get alert. But that is some time away; it’s not where industry is right now.

7.What does thriving mean to you?

Thriving means that you appreciate your skills and surroundings, and find a way to make an impact on those around you.

8.What are you most looking forward to now in general and with your company?

I’m excited because cardiac screening gaining more traction in medical community and the younger more curious physicians like you are taking note of the importance of prevention. The other thing we just launched is the CPR JukeBox where we have a 10 foot by 10 foot tent and an 80 song playlist with modern songs that are 100 beats per minute. We teach kids how to do compressions on red kickballs. It’s a big shift for us. With Simon’s Heart, wherever we attended events, we were the table to avoid. We talked about kids dying. Now, we have fun with families, give them a memorable experience, and teach them a lifesaving skill.