November 28, 2019/ by Amitha/ in Environment, Purpose/ Comments Off on How word clouds offer solace to family members as a loved one dies 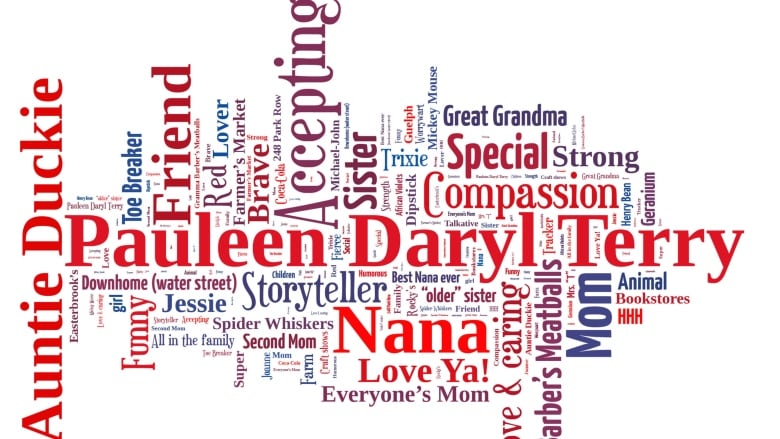 After Daryl Terry was admitted to hospital last October for a kidney infection, the 80-year-old’s condition deteriorated quickly. She was soon moved to the intensive care unit at St. Joseph’s Hospital in Hamilton, Ont.

With a poor prognosis, it seemed she would most likely die in the ICU.

It all came as a shock to family and friends, says her daughter, Barbara Terry, and became particularly difficult when the once-vivacious Daryl lost consciousness and was unable to respond.

But what came next was a surprise of a different kind for the family.

Medical staff gave the family the opportunity to participate in a project created by a McMaster University doctor that aims to humanize the grieving process for families and their health-care providers.

“A few days before my mother passed away, a doctor came in to ask if we wanted to create a word cloud. The team showed us samples of previous word clouds, and I thought: ‘What a nice memento,’ ” Terry said.

The Word Cloud Project emphasizes storytelling and engagement between the health-care provider and the patient.

Connections with loved ones

The Word Cloud project was outlined in a recent paper in the British Medical Journal. In that paper, families who took part in the project describe how creating a word cloud improved connections with the loved one — even after death — by helping the family reflect on the unique characteristics of the dying relative.

The technique of eliciting words was also compared to a form of grief therapy.

“It was a sad time, as my mother had such an impact on those around her, but while we were discussing the word cloud, there were laughs as well as tears as we shared these memories and unique moments,” Terry said.

Daryl enjoyed Coca-Cola, was known for her vibrant red hair and was called “Mrs. T” by many who knew her. As such, “Coca-Cola,” “Red” and “Mrs. T” made it onto the word cloud, as did many other descriptions.

Terry soon realized that her word cloud would take on a much bigger role than just being a keepsake.

“What surprised me most was that we ended up making lots of copies of it and even placed it on the casket during my mother’s visitation, which really brought another unique element to the service,” Terry said.

The Three Wishes Project, the umbrella initiative that includes the Word Cloud Project, was created in January 2013 and is the brainchild of Dr. Deborah Cook.

Cook, a Hamilton-based ICU physician and professor of medicine at McMaster University, was inspired to create the project as a unique way to help families process the death of a loved one — something she has seen time and time again during her 25 years of practice.

“I’ve always had a passion in clinical practice for end-of-life care, and I really wanted to make a difference. I had done some research on end-of-life care in ICU and felt there was something missing today, which is the humanism in medicine,” Cook says.

Through the project, a doctor or nurse elicits at least three wishes from patients, family members or other health providers caring for those patients.

The wishes are classified into five categories: humanizing the environment, tributes, family reconnections, observances and paying it forward. The word cloud falls under several of those categories.

More than 42 per cent of patients and families who took part in the broader Three Wishes Project from January 2013 to November 2014 chose the word cloud as one of their wishes.

Meredith Vanstone, co-author on the BMJ study of the project and an assistant professor in the department of health research methods, evidence and impact at McMaster, believes the Word Cloud Project can also help prevent burnout among health-care providers in the ICU.

“Witnessing a patient die in the ICU can be a difficult experience for health-care providers, too…. It’s a specialty known to have lots of burnout, which is why finding a way to look at the impact of this project on clinicians, which we did in this project, can be important,” Vanstone says.

Julie DeVries, one of the registered nurses who took care of Daryl during her last days of life, had recently moved from working on a general ward to the ICU.

“The word cloud is my favourite part of [the Three Wishes Project], and to see the impact on the Terry family was remarkable,” she said.

“It really changes the atmosphere of the room, and as someone who was used to working on a ward where I knew my patients, it’s made a difference,” she says. “The ICU can feel more mechanical as many of our patients are unconscious. The word cloud added that human element so I could feel like I knew them as a person.”

Cook believes that initiatives like the word cloud can help a new generation of physicians communicate effectively with dying patients and their families.

Her research has shown that trainees value approaches that humanize the process of dying. In a study about the broader Three Wishes Project, she found that the project reframes death and provides a unique experience with end-of-life care.

A lot of people have said it reminds them of why they went into health care and that it re-engages the human aspect of medicine, which is often forgotten in the data-driven, fast-paced, technology-focused hospital setting,” Cook says.

Research indicates that most medical residents have lacked adequate training in end-of-life care.

Dr. Paul Kalanithi, a Stanford University neurosurgeon who died of lung cancer at age 37, wrote a book, When Breath Becomes Air, that was published posthumously and explored how a physician understands death through his own reflective experience.

His wife, Dr. Lucy Kalanithi, an internal medicine doctor at Stanford, says the way medical trainees are taught about end-of-life care is undergoing a shift from purely classroom learning to humanistic learning at the bedside, and that approaches like the word cloud play a key role for patients, their families and providers — including medical trainees.

“There is so much about how medical students and trainees learn about death that can be revisited,” she says.

“For Paul, writing was a big part of how he came to terms with his own death. It also played a huge role in how I processed the end of his life, and because of [his reflections], his health providers came to know him in a different way — even after his death.”

The Three Wishes Project in general, and the Word Cloud Project specifically, have since expanded to include Vancouver General Hospital and St. Michael’s Hospital in Toronto.

Cook has received other expressions of interest and inquiries from hospitals across North America, and hopes to expand the initiative throughout Canada.

Barbara Terry is pleased to hear of that potential growth.

Six months after her mother’s death, Daryl’s word cloud hangs prominently in Terry’s dining room in downtown Hamilton. She hopes other families can benefit in the same way the project has helped her family process the end of Daryl’s life.

“Though I initially thought it was meant to be a nice keepsake, I now see how it was more than that,” she says.

“It was a comfortable and naturally non-intrusive way to share memories and … strengthen those memories even as she was no longer with us.”